From potter's field to reservoir to one of the world's busiest public spaces, Bryant Park has a rich and storied history. Enjoy a brief timeline of the park, from origin to modern days, below.

In 1686, the area now known as Bryant Park was designated public property by New York Colonial Governor Thomas Dongan. After being routed by the British in the Battle of Long Island, at the start of the Revolutionary War, General Washington’s troops raced across the site. In 1807, the grid system of streets was laid out in what is now considered midtown, expanding north from the already cosmopolitan downtown Manhattan. Fifteen years later, in 1822, the land came under the jurisdiction of New York City, and one year later, was turned into a potter’s field. The city decommissioned the potter’s field in 1840, in preparation for construction of the Croton Reservoir on the adjacent plot of land (now the Central branch of the New York Public Library). 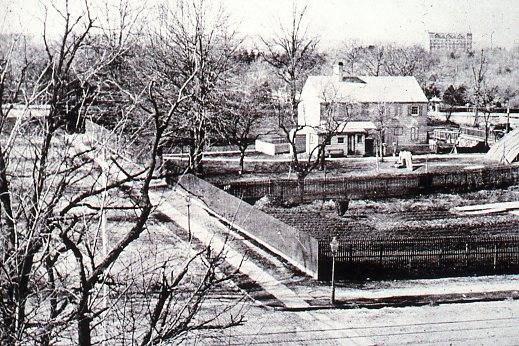 Built in between 1839 and 1842, the Croton Distributing Reservoir was a man-made four acre lake, surrounded by massive, fifty-foot-high, twenty-five-foot-thick granite walls. Along the tops of the walls were public promenades, offering expansive views of the growing city. This water-supply system was one of the greatest engineering triumphs of nineteenth-century America, and widely considered an integral part of the first supply of fresh water carried by aqueducts into the city from upstate New York. Iron pipes transported water forty-one miles to the receiving reservoir in what is now Central Park, thence to the distributing reservoir at this site. The aqueduct system, constructed at a cost of $11.5 million, officially opened on July 4, 1842. In 1846, the New York City Common Council ordered construction of a public park on the land next to the Reservoir. Reservoir Park was formed in 1870, and one year later, underwent a $72,000 renovation. The reservoir itself was eventually torn down, following numerous delays, in 1900. 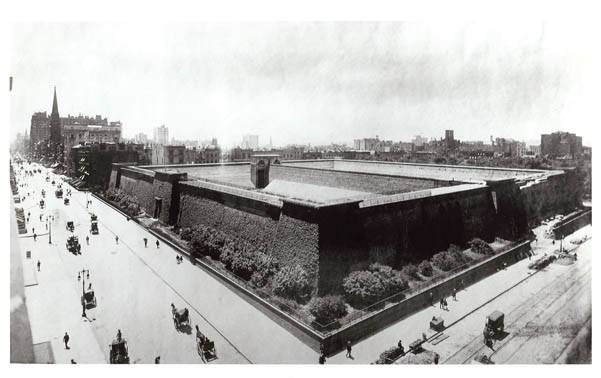 The Crystal Palace and Latting Observatory

Inspired by the success of The Great Exhibition of 1851, held in the famed Crystal Palace exhibition hall in Hyde Park, London, New York City began preparations for a similar exhibit on U.S. soil. The New York Crystal Palace was built on Reservoir Square, the park just west of the Croton Reservoir. Designed by Georg Cartensen and Charles Gildemeister, the glass and metal structure was built in the shape of a Greek cross and boasted a domed roof 100 feet in diameter. It remained standing until October 5, 1858, when it burned down.

The Exhibition of the Industry of All Nations, also commonly referred to as the Crystal Palace Exhibition, featured four thousand exhibitors and displayed the industrial wares, consumer goods, and artworks of the nation. Notable exhibits included mineral resources of the U.S., the newest precision steam engines, and the largest crocodile ever captured. United States President Franklin Pierce delivered a speech at the opening ceremony on July 14, 1853.

Built next to the Crystal Palace in 1853 as part of the exhibition, was the 315-foot-tall Latting Observatory. Conceived by Waring Latting, and designed by architect William Naugle, this octagonally based, iron and wood tower was the tallest building at the time of its construction and offered patrons unobstructed views of Staten Island, Queens, and New Jersey. It perished in an 1856 fire.

The first of its kind in New York City, the Crystal Palace Exhibition set off one of the first major tourism booms in New York with over one million visitors. (In spite of its popularity, the exhibition’s sponsors lost $300,000 on the venture.) The exhibit closed on November 1, 1854, though the structure remained standing and was leased for a variety of purposes over the next four years. 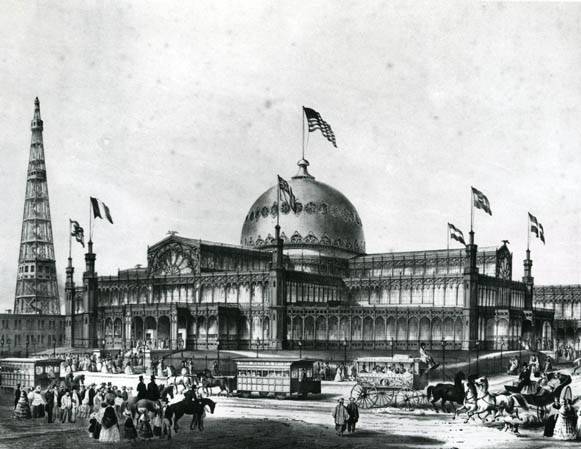 During the Civil War, Reservoir Square was used as an encampment for Union Army troops. Shortly after, in March of 1863, the Union government issued the first draft notices in American history, setting off a series of riots throughout the city. One of the most horrendous acts of the riots was the July 1863 burning of the Colored Orphan Asylum on Fifth Avenue between 43rd and 44th Streets. Throughout the late nineteenth century, many uses were suggested for the reservoir site and also the square, including a rejected petition to use the space for an armory. 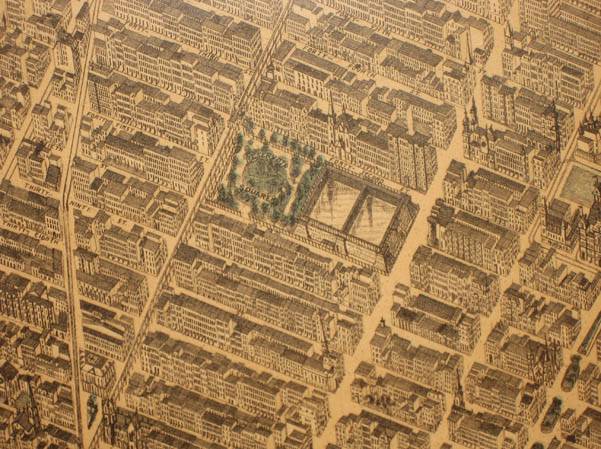 In 1884, Reservoir Square was renamed Bryant Park, to honor recently deceased Romantic poet, longtime editor of the New York Evening Post, and civic reformer, William Cullen Bryant (1794-1878). Around this time, the city approved designs for the New York Public Library, submitted by architects John Merven Carrére and Thomas Hastings. The Beaux-Arts building was completed in 1911, with a raised terrace at the rear of the library and two comfort stations at the east end of Bryant Park. 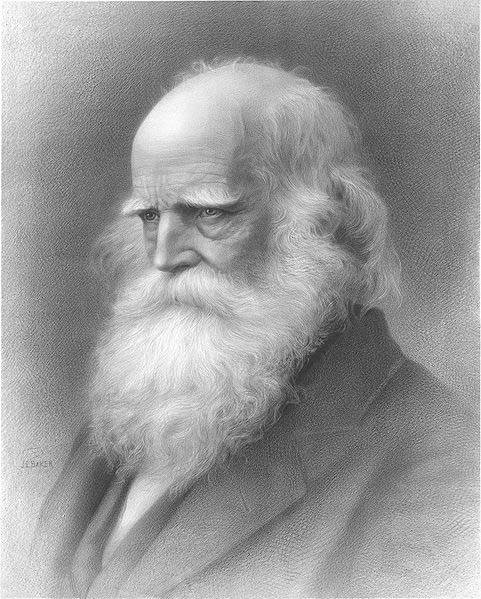 A Park in Transition

Throughout the 1920s, the north half of Bryant Park was closed to the public due to construction of the Interborough Rapid Transit (IRT) subway tunnel along 42nd Street. IRT contractors began work in early 1922, using park space to store equipment and debris until 1927. Reflecting on this decade, the author of a 1936 The New Yorker article remarked that in the past fourteen years “Bryant Park has been closed to the public for half of that time on account they were digging in it . . .” also calling it one of the most “badgered and turned-up lots in the world.”

Five years later, in April 1932, the Washington Bicentennial Commission erected a replica of Federal Hall on the east side of the park, just behind the New York Public Library. After the celebration, the hall remained standing and boarded up for several months until it was torn down in April 1933. 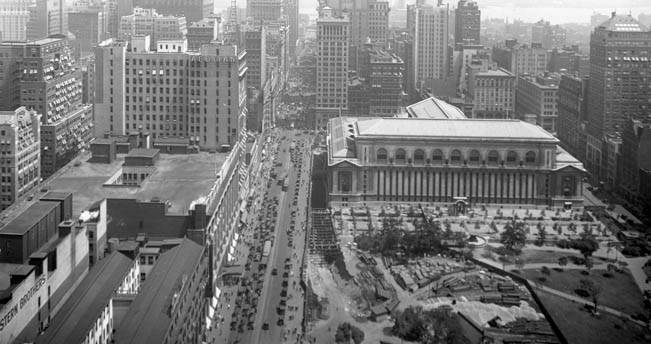 Shortly after the demolition of the Federal Hall replica, the Architects’ Emergency Committee sponsored a contest to redesign the park. The winning submission came from Queens-based architect Lusby Simpson, and was a classical scheme of a large central lawn, formal pathways, stone balustrades, allées of London Plane trees, and at the west end, an oval plaza containing the Josephine Shaw Lowell Memorial Fountain. When Robert Moses became Parks Commissioner in 1934, the plan was executed with the aid of consulting architect Aymar Embury II and landscape architect Gilmore D. Clarke. The park opened to the public on September 14, 1934. 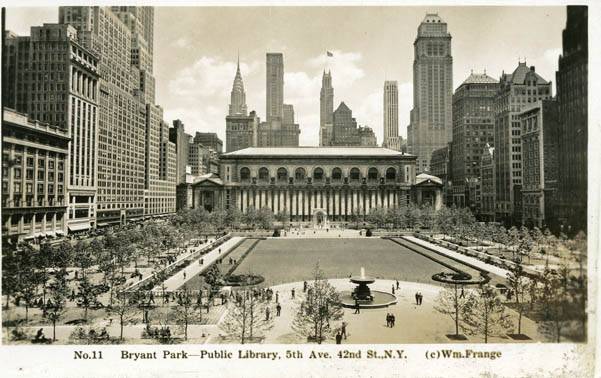 By 1979, New York seemed to have given up Bryant Park for lost as an urban amenity, as well as an historic site. In 1974, the Landmarks Preservation Commission designated Bryant Park as a Scenic Landmark, calling it “a prime example of a park designed in the French Classical tradition – an urban amenity worthy of our civic pride.” Five years later, however, William H. (“Holly”) Whyte wrote in a report solicited by the Rockefeller Brothers Fund: “If you went out and hired the dope dealers, you couldn’t get a more villainous crew to show the urgency of the [present Bryant Park] situation.”

But by the late 1990s, actual lunchtime head counts on a sunny day would reach the 4,000 range – and the drug traffickers had been gone for a decade. The Rockefeller Brothers created the Bryant Park Restoration Corporation (BPRC), under the founding leadership of Andrew Heiskell, then Chairman of Time Inc. and the New York Public Library, and Daniel A. Biederman, a Harvard Business School graduate and systems consultant with a reputation as an innovator in downtown management. Heiskell and Biederman, in 1980, created a master plan for turning around the park. In the words of an Urban Land Institute case study, “Biederman began experimenting with a series of efforts to bring people back to the park, while also exploring how to generate revenue.”

Summer 1988 saw city agencies approve BPRC’s plans (drafted by Hanna/Olin Ltd.) to build new entrances for increased visibility from the street, to enhance the formal French garden design (with a lush redesign by Lynden Miller), and improve and repair paths and lighting. BPRC’s plan also included restoration of the park’s monuments, and renovation of its long-closed restrooms. That same summer, the city approved BPRC’s designs (by Hardy Holzman Pfeiffer Associates), for two restaurant pavilions and four concession kiosks, which were to generate off-peak activity and added revenue for operations. These facilities opened in stages in the 1990s.

Bryant Park reopened in April, 1992, to lavish praise from citizens and visitors, the media, and urbanists. And, as the Urban Land Institute wrote it in an award citation, “the success of the park feeds the success of the neighborhood.” Soon the chorus was joined by the business community, whose assessments helped fund the renewal and now benefit from higher rents and property values. 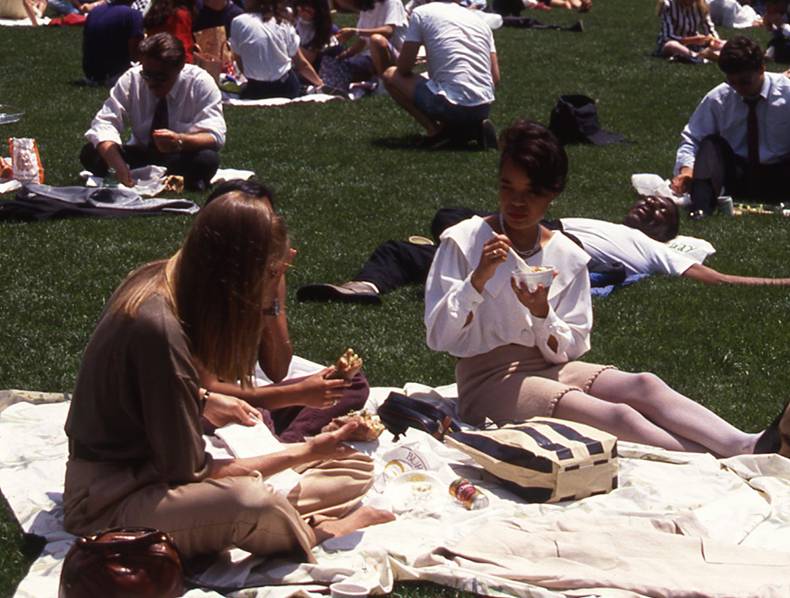