Bryant Park strives to design public spaces, structures, furniture, and objects with a respect for both nature and the end user. Attention to detail and useful elegance are some of the qualities you’ll experience with as you discover the park. Facing onto Bryant Park from both 40th Street and 42nd Street are several noteworthy buildings of the kind that have long defined Midtown Manhattan as one of the architectural showplaces of the world. 500 Fifth Avenue
At the northwest corner of Fifth Avenue and 42nd Street is one of the classic New York skyscrapers of its period, known by its address of 500 Fifth Avenue. Shreve, Lamb & Harmon–the architects of the Empire State Building–designed the soaring Art Deco tower in 1930. It is 60 stories high.

Salmon Tower
Continuing west on 42nd Street, at 11 West 42nd Street is a building originally known as Salmon Tower. York & Sawyer, one of New York’s greatest architectural firms, designed the handsome building in 1926-27. It is especially noteworthy for the tile vaults of its lobby, produced by the renowned Guastavino firm, and for the bas-reliefs around its entrance, representing the months of the year. New York University occupies part of the building.

W.R. Grace Building
Gordon Bunshaft of Skidmore, Owings & Merrill designed the travertine-and-glass W.R. Grace Building, with its dramatically sloping form, to the west in 1972. The site had been occupied from 1913 to 1970 by Stern’s department store, which moved here from 23rd Street in the “Ladies’ Mile” district. (After 1970, Stern’s, founded in New York City, was without a Manhattan presence until it opened its store in Manhattan Mall at Greeley Square). 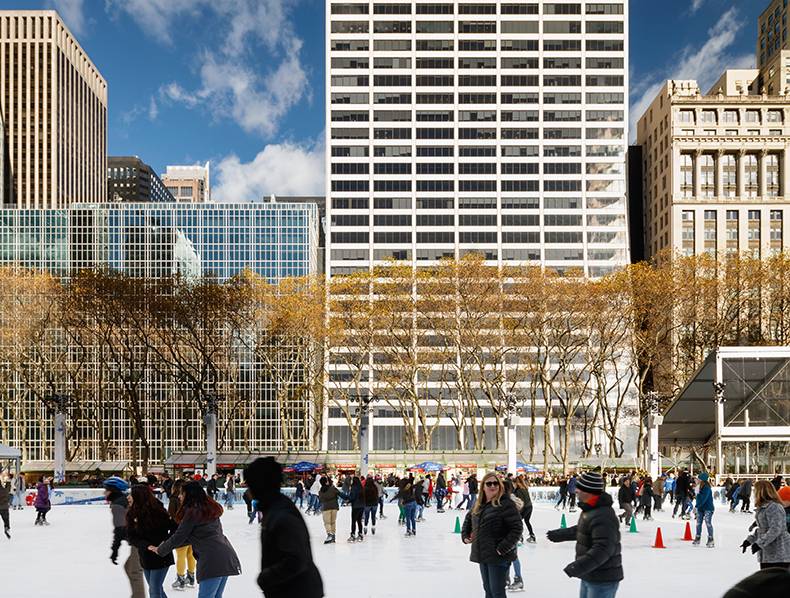 Avenue of the Americas

One Bryant Park
The iconic glass skyscraper across from Heiskell Plaza is one of the park’s newest and most sustainable neighbors. One Bryant Park, better known as the Bank of America Tower, was designed by COOKFOX Architects and completed in 2010. At 55 floors, the building is New York City’s eighth tallest skyscraper, as well as the first commercial high-rise building to earn LEED Platinum certification. The building’s focus on creating a sustainable workplace is reflected in its design, which promotes daylight, fresh air, and a deep-seated connection to nature. On the ground floor, the building’s Urban Garden Room features some familiar Bryant Park furniture.

Bryant Park Studio Building
The distinctive building at the southeast corner of the Avenue of the Americas and 40th Street is known as the Bryant Park Studio Building. Charles Alonzo Rich designed the Beaux-Arts-style building in 1900-01 to contain artists’ studios, and over the years such notable artists as the photographer Edward Steichen and the painter Fernand Léger maintained studios in the building. 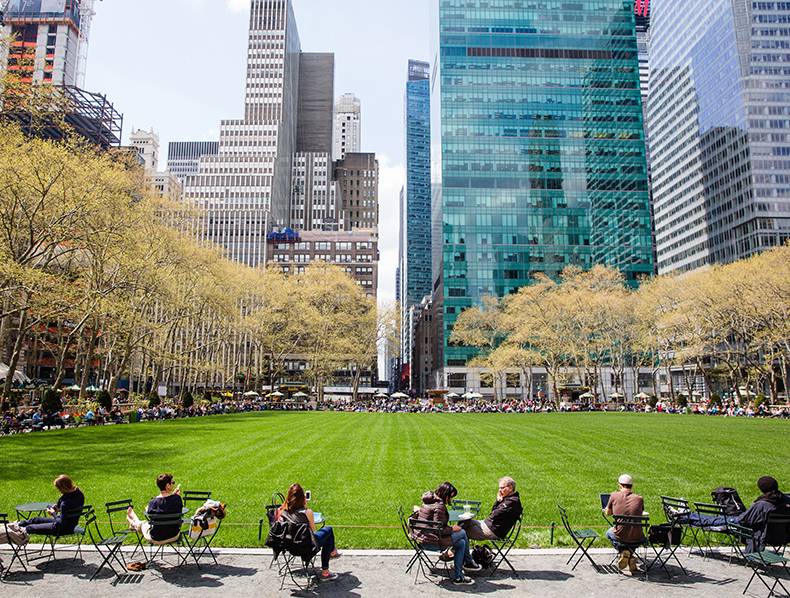 American Radiator Building
Raymond Hood and J. André Fouilhoux designed the most prominent building on the block, and one of the best-loved sksyscrapers in the city, the American Radiator Building of 1923-24. This romantic tower is of dark brick (an effect achieved by dipping the brick in manganese), and is topped with gold, so that when illuminated at night the building resembles a glowing radiator coil. Architect Hood, who died at the age of fifty-three in 1934, was one of the most influential skyscraper architects of the period, and directed the team of architects that designed the early buildings of Rockefeller Center. The American Standard Company later occupied the building, which has been converted by the architect David Chipperfield and the hotelier Brian McNally into the Bryant Park Hotel. 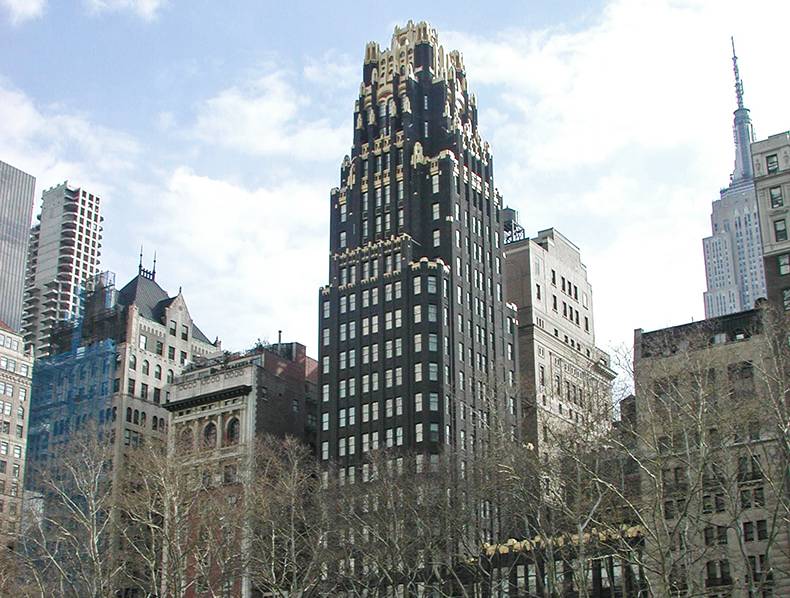 The New York Public Library
The New York Public Library was built on the site of the old Croton Reservoir, a popular strolling place that occupied a two-block section of Fifth Avenue between 40th and 42nd Streets. Following an open competition, the relatively unknown firm of Carrère and Hastings was selected to design and construct the new library. The result, regarded as the apogee of Beaux-Arts design, was the largest marble structure ever attempted in the United States. Before construction began, however, workers spent two years dismantling the reservoir and preparing the site. The cornerstone was finally laid in May 1902. The Library eventually opened nine years later in 1911.

Explore the man-made marvels of Bryant Park-their creators, their history, and those they honor. The New York Public Library building was designed by John Merven Carrère and Thomas Hastings. The magnificent Beaux-Arts building sits on a terrace that was designed to elevate the building above surrounding streets, to provide gathering places for people, and to provide a setting for public sculpture.

Sculptor Edward Clark Potter created the lions, which were carved in pink Tennessee marble by the Piccirilli brothers. They were later nicknamed “Patience” and “Fortitude” by Mayor Fiorello LaGuardia.

The pediment statuary is by Paul Wayland Bartlett, and also carved by the Piccirilli brothers.

The fountains on either side of the library’s entrance are Truth” on the (South) side and “Beauty” on the (North). They are the works of the major American sculptor Frederick William MacMonnies. 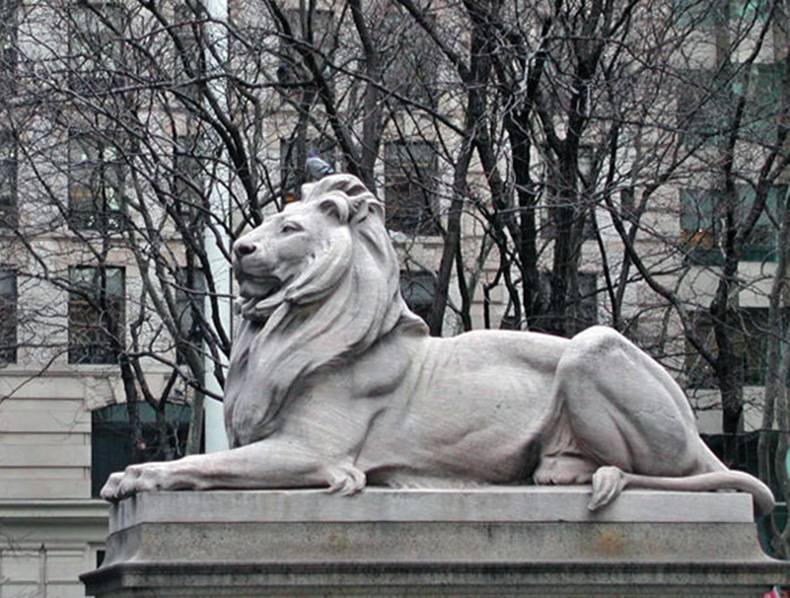 Raffaele Menconi and the Tiffany Studios created the bronze flagpole bases, which have been called the most beautiful in the country. 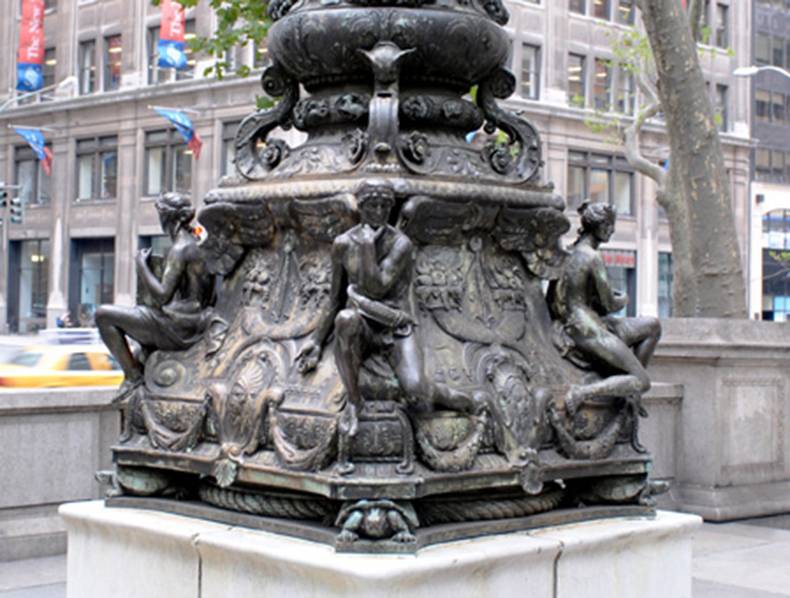 The Library’s rear terrace, designed by Thomas Hastings includes classical ornaments such as garlands, urns, and ram’s heads. This is the site of the William Cullen Bryant Memorial. Bryant (1794-1878) was a newspaper editor, one of America’s most popular poets, and a civic improver who led the campaign to create Central Park. Herbert Adams, one of the best New York sculptors of his period, created the bronze figure of Bryant. The memorial was dedicated in 1911, at the completion of the library.

A bronze bust can be seen just to the west of the Bryant Memorial. In 1923, sculptor Jo Davidson created a bust of  Gertrude Stein, American author, poet, playwright, and art collector. Stein was also famous for her Paris salon, where writers and artists like Pablo Picasso, Ernest Hemingway, F. Scott Fitzgerald, Ezra Pound, and Henri Matisse would meet. Now in the collection of the Whitney Museum of American Art, the Bryant Park bust is a cast made from the original. 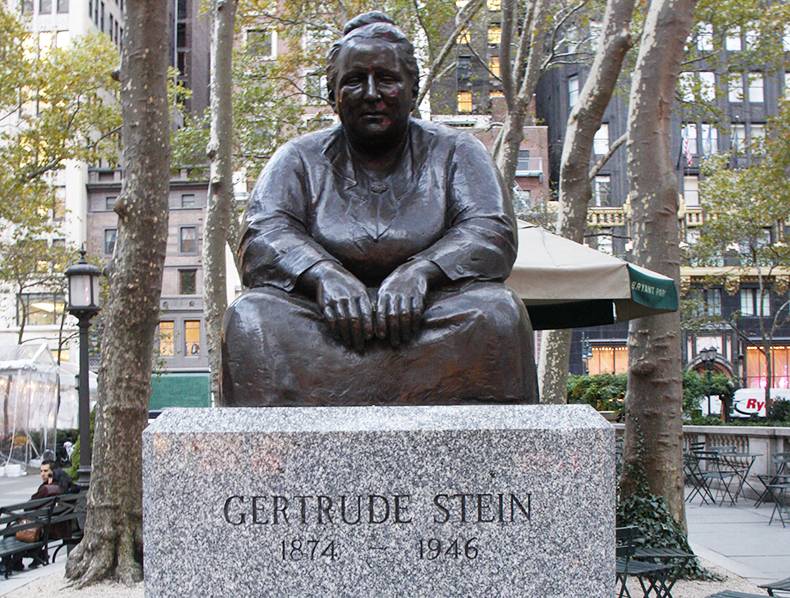 On the north side of the park is a fine statue in bronze of William Earl Dodge (1805-83), businessman (a founder of Phelps, Dodge & Company, leaders in the copper trade) and philanthropist. John Quincy Adams Ward, an American, created the statue, which was dedicated in Herald Square, in 1885. In 1941, when Herald Square was renovated, the Dodge statue was moved to its present location. 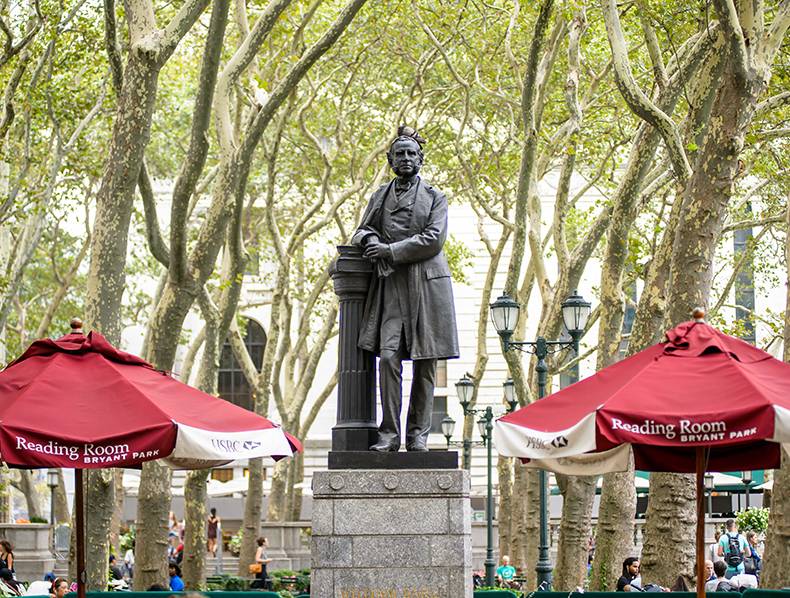 At the western gateway to the park on the Fountain Terrace is the pink granite Josephine Shaw Lowell Memorial Fountain, dedicated in 1912. This was the city’s first public memorial dedicated to a woman. Lowell (1843-1905) was a social worker and progressive reform leader, best known for creating the New York Consumers League. She also founded several charitable organizations, including the New York Charity Organization, the Woman's Municipal League, and the Civil Service Reform Association of New York State. Charles Adams Platt designed the fountain. 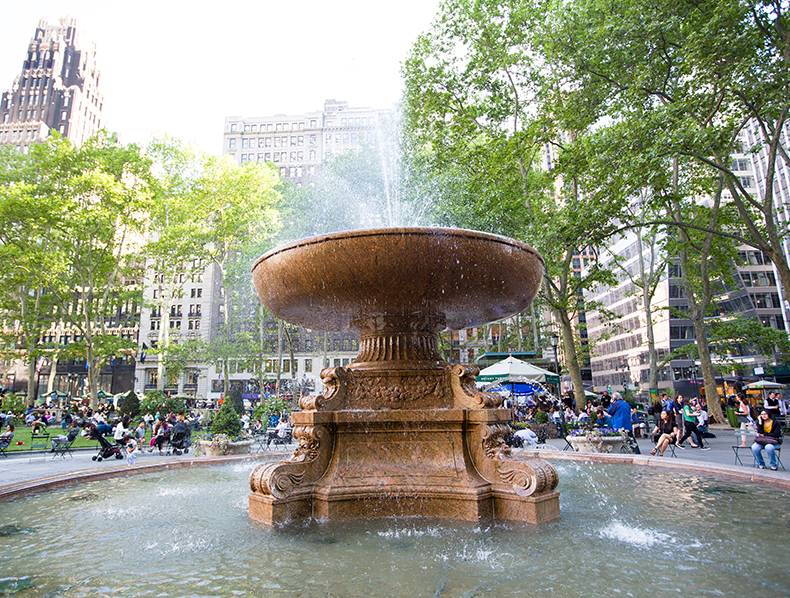 On the south side of the park is a bronze bust of Johann Wolfgang von Goethe (1749-1832), the great German writer. The German sculptor Karl Fischer created the bust in 1832, the year of Goethe’s death. The Goethe Club of New York purchased it in 1876 and donated it to the Metropolitan Museum of Art. The museum in turn donated it to Bryant Park in 1932, the centenary of the writer’s death. 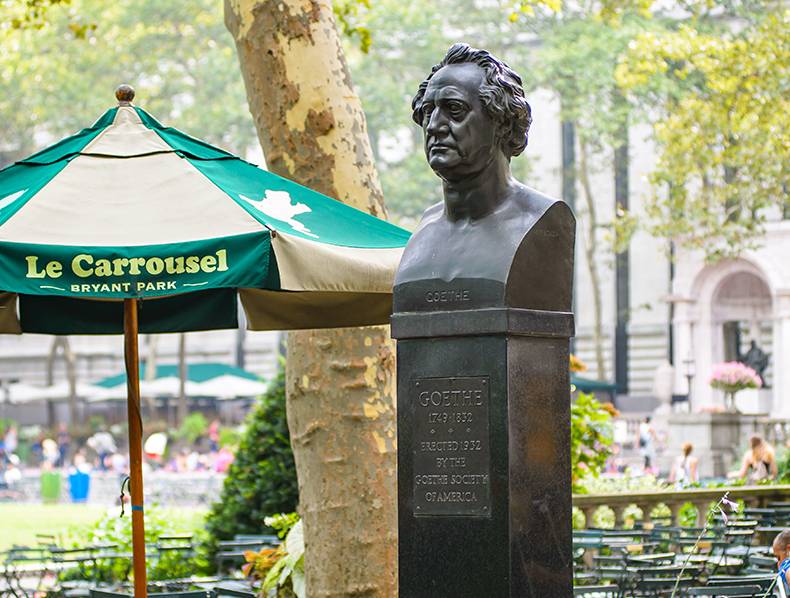 At the west end of the park is a bronze statue of José Bonifácio de Andrada e Silva (1763-1838), dedicated in 1955. The statue was a gift from the people of Brazil at the time that Sixth Avenue was renamed to Avenue of the Americas in honor of pan-American cooperation. Andrada was a leader in the fight for Brazilian independence from Portugal and served as the newly independent country’s first prime minister. The sculptor is José Otavio Correia Lima. 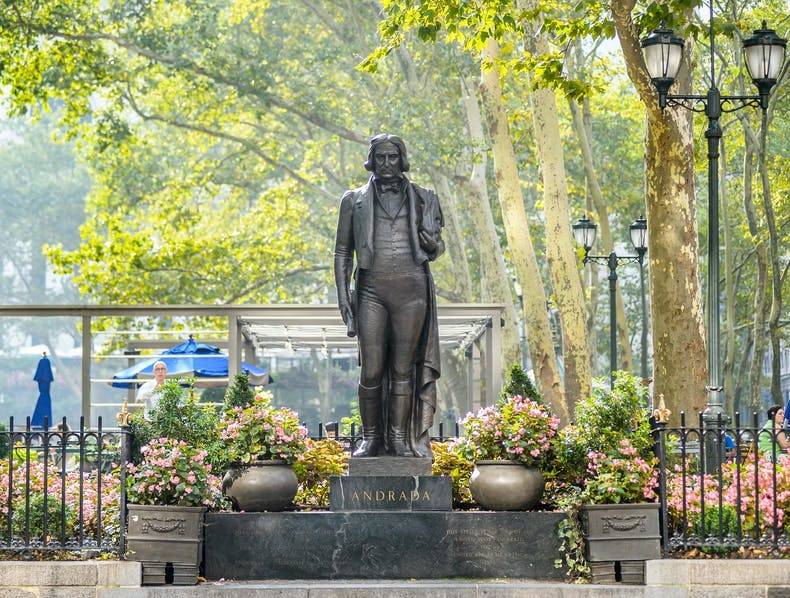 The newest monument in Bryant Park is the statue of Benito Juárez, also at the west end of the park. A gift from the State of Oaxaca to the City of New York, this statue, handcrafted by Moises Cabrera Orozco, is the first Mexican figure to be placed in the city of New York. Juárez is a Mexican national hero and Mexico’s first president of Indian descent. Revered by his countrymen as a great political leader, Juárez, proclaimed the “Reforma Laws”, thus establishing the foundation for the Mexican Republic and preserving the independence of México. 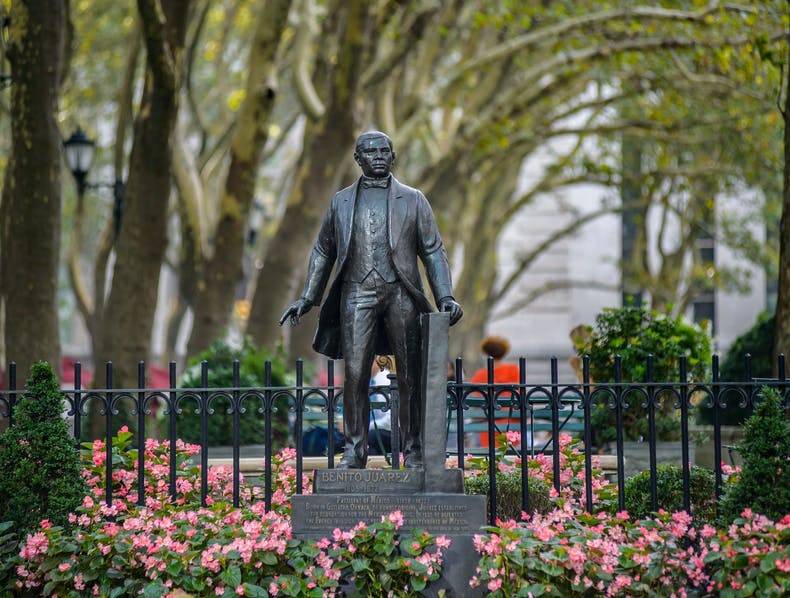